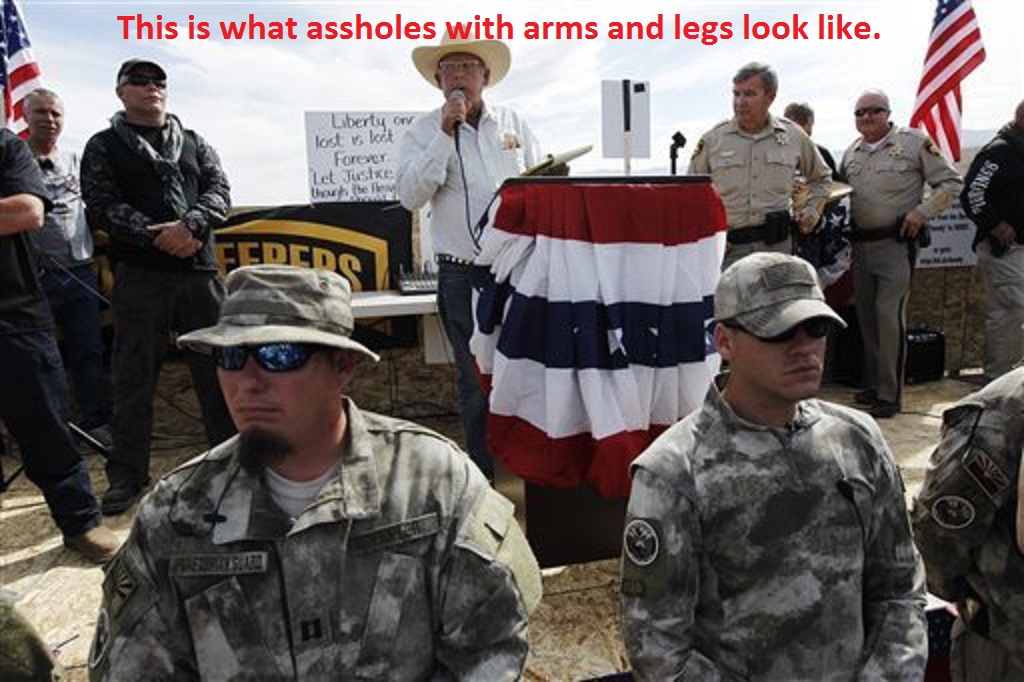 I try to keep this blog about the science of the Earth, and the adventure of discovery, but sometimes something just chaps my hide so much I have to get a little preachy.  That ‘something’?  A grand selfish asshole name Cliven Bundy. A greedy Rancher who has been stealing from the taxpayers for decades while pocketing millions in profits.

As an economic geologist I must follow certain laws when prospecting and staking claims on federal land.  These laws require enforcement, and the lands require maintenance.  For both myself and the public who owns the land to benefit, I am charged nominal fees to preserve the mineral rights to the claims I stake.  My incentive to pay for these fees is that the government will protect my rights to the minerals, and if I don’t pay the fees my rights to the land are revoked and someone else then has the right to stake a claim where mine once was.

The same can be said for federal range land.  Article IV, Section 3, Clause 2 of the United States Constitution states:

The Congress shall have power to dispose of and make all needful Rules and Regulations respecting the Territory or other Property belonging to the United States; and nothing in this Constitution shall be so construed as to Prejudice any Claims of the United States, or of any particular State.

Basically, the feds reserve the right to tell us what we are, and are not, allowed to do on federal land.  This dates back to when the original thirteen colonies ceded the Western expanse of their territories to the federal government all the way to the Mississippi River.  This is further supported by the fact that the 5th and 14th Amendments outlay how the government can even tell you what you can and can’t do on your own land (think “due process”, “zoning regulations”, and “eminent domain”).

In 1909 the National Forest started charging ranchers grazing fees.  Later in 1934 the Bureau of Land Management followed suit.  The purpose was two fold: To stop the rapid degradation of federally owned lands, and to stop the perpetual anguish of range wars.  Without federal involvement ranchers were killing each other over who could graze their cattle where.  When the feds started charging for grazing that established a regulatory process that controlled whose cattle could graze when and where.  The federal lands improved in quality, and cowboys stopped dying stupid deaths.

For those of you unfamiliar with Cliven Bundy, he is an itchy little butthole who has become the selfish, greedy hero of Neo-Nazi affiliated militia assholes all over America.  When Bundy asked a bunch of them to show up in camouflage and jackboots to threaten federal officers who were mandated by the courts to confiscate Bundy’s cattle, the militia fools were glad to carpool for the first time in their lives.  You see, Bundy has been grazing his cattle on Federal land for decades and not paying his legally required grazing fees.  Fees that amount to $1.35 per head of cattle per month.  In essence Bundy is supposed to pay the Bureau of Land Management about $18.90 to feed each one of his head of cattle over the lifespan of said cattle.  $18.90 to feed an entire 1500lbs animal over the course of its life; an animal that Bundy will then sell for more than $2,000.  Bundy has never paid for grazing.  He refuses.  He owes the government at least $300,000 in back fees and another $1 million in taxes (over which a time Bundy has sold some $30,000,000+ in cattle all fattened on taxpayer-owned land).

Add to this, Bundy has been grazing his cattle on protected land illegally.  Land that is supposed to be free from cattle in order to protect the endangered desert tortoise.  What an asshole!

Bundy claims that his family has been grazing on the land for 140 years and has a special right to the range, but in the last 115 years there is no record of the Bundy clan ever paying a damned cent to the feds for grazing on our land.  People lose the rights to mineral claims all the time even though a mine may have been in the family for generations.  If they haven’t paid the BLM the $140 a year per claim it costs to maintain their rights to the minerals they will be shit out of luck when someone else poaches their claim out from under them.  Cliven Bundy has no legal precedent, the federal government does.

The feds have managed to repossess some of Bundy’s illegal herd, but have run into a problem when a bunch of fat dip shits in camo carrying assault rifles impeded federal agents from carting away the rest of the lawbreaker’s herd.  At this point in time the feds have backed down not wanting any bloodshed.  I say screw them.  Establish the Rule of Law and have the FBI go full Waco on this greedy piece of shit and his idiot followers.  I have no problem with a bunch of racist militia members losing at a game of war with the federal government.  Cliven Bundy is stealing from the American tax payers and making millions off of it.  If these morons want to lay their lives down for him then so be it.  Let them stand as an example of what happens when you steal from the taxpayers.

Grazing fees are no different than property taxes, or paying the license tabs on your car.  If you aren’t willing to pay, you don’t get to play.  It just pisses me off to no end when some greedy sack of crap breaks the law and a bunch of jerks with machine guns jump to his defense.  I hope they all end up in prison.